Here it is!  The moment when I sing a show of covers.  We’re going to have blast playing all of Elvi’s’s earliest tunes.  You’ll enjoy the killer back-up band:  Eric Moon, Sean McGowan, Charlie Mertens and Dave Nochols.  I’ll be singing, playing my new hummingbird guitar and fiddling.  Lannie’s CLocktower is so classy and cool, its the perfect venue for a nostalgic night out.  Bring your date, bring your friends!  So here’s what its about:

This classy show is a tribute to the first recordings Elvis made at Sun Studio in 1954 and 1955, Memphis.  Heralded as “the big bang of rock & roll,” these tracks featured the virtuosic playing of guitarist Scotty Moore and bassist Bill Black.  The Sun recordings showcased the power and honesty of the blues with the wild feel of an all night party, while they simultaneously encompass the history of American music with a rockabilly, swing, western feel.  This show will have you dancin, humming and learnin’ small tidbits of the where, whens and whys down the memory lane of Elvis’s early days at Sun Studio.

For national fiddle champion, singer and songwriter Katie Glassman, Elvis’s honest charisma and style filled her gap between Bob Wills and his Texas Playboys and the Beatles. These early recordings maintain the prestige of old time swing, blues and rockabilly music, which is where Katie Glassman’s vintage-toned voice shines.  This Elvis Sun Sessions show is not an impersonation, but rather a tribute to the incredible influence, nostalgia and talent of Elvis’s legacy.  Katie will be joined by University of Colorado professor Sean McGowan on guitar, Colorado Avalanche organist Eric Moon on keys and slappin’ upright bassist Charlie Mertens. 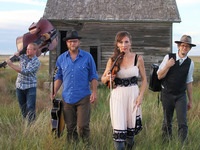